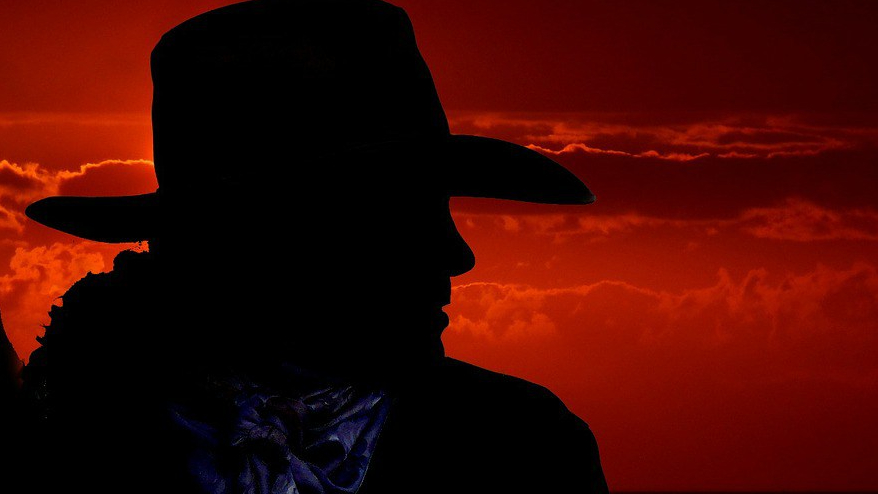 Leave Your Guns At Home, Part 4

Somewhere in the dead of the night, Ricksin began to win. Liquor flowed, and laughs followed, but soon both dried up as the other men realized how much money they were losing. As it began to be so late it was early, Ricksin possessed a considerable stack of coins and bills that he didn’t start with.

Somewhere in Patch’s tiny, cactus-addled brain, things started to add together. Despite, or perhaps because of, the fog of alcohol, he felt like he was being played. The bounty hunter had just won big, and Patch was nearly out of money.

As Ricksin reached for his newly-acquired cash, Patch pulled a knife from his boot, and buried it’s tip in the poker table with a definitive thud.

The bounty hunter blinked. “Do you want to bet that too?”

Ricksin leaned back in his chair. Had Patches been less drunk, and more discerning, he would’ve been worried about the grin playing about underneath the bounty hunters mustache. As it was, he was more concerned about his money.

“I’m surprised you can count that high right now, how many shots have you had?”

A noise came from the bald man’s gullet that sounded like something between a gurgle and a growl. “Not so’s many I don’t know when I’m being hustled.”

The other men began to put two and two together behind bloodshot eyes, and turned on the newcomer.

Ricksin simply pretended to think deeply about what Patch had said while playing with a coin. “Hustled?” In a deft twist, he spun the coin up, balancing it on the tip of his finger as it spun. “Now that’s a bold accusation, there, partner.”

“I don’t give a shit, how bold it is.” He hissed. “No one plays better the more they drink.”

Ricksin nodded, as if considering the truth in Patch’s words. “Yeah, I think you guys can attest to that.”

A look of inspiration dawned on Ruckus’s face. “You’ve been drinking right along with us! And you’re not drunk at all!”

Teredy, always on top of things, joined in. “Hey yeah!”

Ricksin nearly chuckled as he held up his hands “Fellas.”

Two derringers extended from each of his sleeves, and he gunned down Teredy and Ruckus without blinking. Before Patch could react, the Bounty hunter reached into his coat and pulled a revolver. Two shots rang out, and Patch was no more.

Ricksin kicked underneath the table as hard as he could, sending it and all the money flying into the air. He dived behind it as a small explosion rang out in the saloon, and half the table disappeared in a flurry of splinters — the barman had a shotgun.

Ricksin waited for the splinters to stop falling and relative silence to take over the room again. “I got no trouble with you, barkeep.”

“You come in here shooting up my regulars and you think you’ve got no trouble?”

The Bounty Hunter listened intently to the barman’s voice. “Fair point.” He put his revolver up against the table and pulled the trigger twice. The next sound was distinctive: a body hitting the floor.

Ricksin stood up carefully, confirming that everyone was good and dead before he relaxed. He surveyed his mess. Six bullets, four bodies, a bounty of a thousand on at least two of ‘em. Plus the hundred or so he won in the game.

Not bad for a night’s work.

Yeesh, this took a while for me to get out, sorry about that guys. I just moved out of Scotland and I’ve been really busy trying to get re-established in the good old US of A. But Everything’s calming down a bit here so I’m gonna try and get some more stuff up! Thanks for sticking in there, and happy reading!